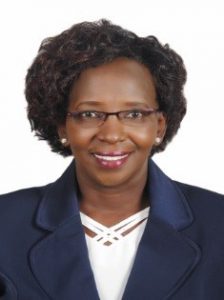 Hon. Dr. Linah Jebii Kilimo is the former chair of Anti-Female Genital Mutilation Board,  former Assistant Minister for Cooperative Development in Kenya Government (2008-2013); Minister of Immigration (2004-2005) and Minister of State, Office of the President (2003-2004). She was the immediate former Chairperson of the Kenya Women Parliamentary Association (KEWOPA), has previously worked as the Marakwet East representative to the Constitution of Kenya Review Commission (CKRC) referendum (2002). She also previously worked as a Banker with the Kenya Commercial Bank (KCB) and as a Paralegal / Human Rights Officer for the Education Centre for Women in Democracy (ECWD).

Dr. Linah holds an Honorary Doctor of Divinity Degree from Esther Mallet International Bible University in Norwalk, California, USA (2006), a Bachelors Degree (BA) in Counseling from the Kenya Methodist University (KeMU) and a Diploma in Control & Management of HIV/AIDS from Kenyatta University.

Currently, besides being the Chair of the Street Families Rehabilitation Trust Fund, Dr. Linah is also a Strategic Advisory Group member of the Girl Generation, British Funded project aimed at ending FGM within a generation. She is a Member of the Panel in the Commission of Inquiry into Childhood Pregnancies in Kenya, in relation to the practice of harmful cultural practices like FGM and Forced Early Childhood Marriages.